Have any dog owners experienced back problems among your Coton de Tuléar? If that is the case, you're encouraged to contact  lene Kristensen, Doctor of Veterinary Medicine at Skive Veterinarian Hospital on phone +45 97 51 30 45 or email to kris.lene@mail.dk

During the last year Skive Veterinarian Hospital has had to put to sleep a Coton de Tuléar bitch and her offspring due to slipped disk. Disk herniation is a serious hereditary disease. The disease is a common occurrence in Dachshund, Basset Hound, Shih Tzu, Pekingese, Lhasa Apso, Beagle and Miniature Poodle. Is it also found among Coton de Tuléar?

A spinal disc herniation (prolapsus disci intervertebralis), is a medical condition affecting the spine, in which a damage in the outer, fibrous ring (annulus fibrosus) of an intervertebral disc (discus intervertebralis) allows the soft, central portion (nucleus pulposus) to bulge out and cause inflammation and often nerve root compression. 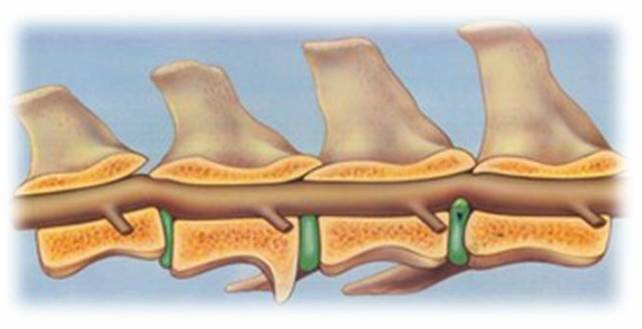 In light cases this can cause back ache, weak disturbances of balance and reduced mobility. The dog might for example not jump as it used to. In severe cases the dog will get acute and often distinct neurological symptoms with strong pain combined with reduced use of limbs or paralysis of the hind quarters.

In a big disk herniation project carried out at Ku-Life (formerly "Landbohøjskolen") a litter study was carried out among Danish Dachshunds. 26 litters with a total of 120 puppies was part of the project. The participating dogs were all from "high-risk" families meaning that disk herniation was known to be occurring in the lineage. 28 of the puppies were not found, and of the rest 51 were found to have the disease and 41 stayed healthy. The conclusion to this study was that disk herniation has an enormous hereditability and that the disease is spread through the male dogs due to the way the breeding is managed. The disease is equally hereditary for both sexes, but the bitches are usually withdrawn from breeding before they have the chance to spread the genes much whereas some males will father quite a large amount of puppies during few years.

In a later Danish study in the period 2004 - 2005 61 wirehair Dachshunds in the age 24 - 36 months were x-rayed. X-rays were taken of the back to assess the amount of disks with calcification and resulting lowered flexibility with an increased risk of disk herniation as a consequence. The conclusion was that the hereditability is very high. (Hereditability 0.6)

Scientists both at Ku-Life and in Norway are currently working on locating the disease through a DNA analysis and that will ease the breeding work a lot in the future. The dogs can just have a blood test examined instead of getting x-rayed.

The wish to breed healthy dogs of your race.