Mon Cherie and her German Adventure

as told by Mon Cherie 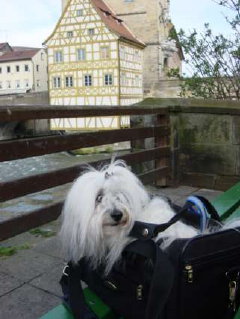 In April I accompanied my Mom to Germany. I could not be separated from her nor could she be without me. We cannot exist without each other. Thatï¿½s why she took me along.

For a month before, she trained me to be in my Sherpa bag. It was in the living room and every time I walked by, miraculously there was a treat in it. Of course, I visited my bag very often. Then I would sit and curl up in my bag for hours. Of course, this was also rewarded by a treat. Actually I was quite comfortable in it and liked to go in and stay there. I would go in my bag with my mom everywhere here. I also went to the vet, because I needed an international health certificate in both German and English that stated that I had my rabies and all other shots. In the meantime, my mom packed my suitcase with my necessary items like my food, vitamins, cookies, grooming brushes and combs, shampoo, conditioner, towels, bones, toys, raincoat, booties, my blanket, etc. I had more stuff than my mom. Then I also had to pack toys and presents for my Coton friends in Germany. 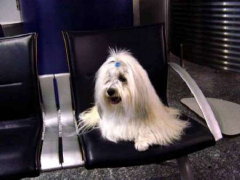 Finally, one morning a taxi picked us up and took us to the airport. We waited a long time till we boarded the plane. We went through the security check and that was the only time I was allowed out of my bag. Mom carried me through the checkpoint. I was quite nervous, since there were so many new sounds, sights and smells. Everybody wanted to touch me, but I just showed them my teeth and let out a firm growl: stay away. By that time, I was getting hungry; I missed my dinner. Little did I know that I wouldn't see food till 24 hours later. Mom was concerned that I hadnï¿½t gone potty for a few hours. Every once in a while she would spread out newspapers and tell me in German: Pipi machen. (Go pee) This was in the airport, the lounge, the airplane, etc. Didnï¿½t she know that I need grass to go potty? At home I am trained to pee on the newspaper. But this was all so strange to me. After 12 hours, I finally peed on the newspaper at the Frankfurt airport. 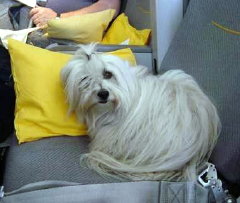 Mom was so happy and kept saying what a good girl I was and she gave me several cookies. In the airplane, I slept most of the time in my Sherpa bag, but mom took me out and I sat on her lap for a while. I was licking on ice cubes a lot. Not bad. The flight attendants all came to look at me. One went on her knees and welcomed me officially on board in the name of the airline.

Finally, after a pit stop in Frankfurt, we flew on to Nuernberg. I was sitting in my Sherpa bag on top of the luggage cart. Suddenly, I started barking very loudly because I saw my three German coton friends running towards me: Basti, Aurelia and Biene. We had never met, but had emailed each other a lot. We made such a racket that nobody in the airport could hear anything. Ha..haï¿½ Everybody was looking at our Coton crazy moms and us. With the promise that we would see each other very soon, we left with our friends for our final destination Bamberg.

Bamberg is my momï¿½s hometown; it has about 70000 inhabitants and many beautiful monuments of cultural interest. Mom is speaking to me in German a lot so I could "talk" with her friends. I call them Uncle Hilmar and Aunt Martha.

I liked them instantly since both spoiled and loved me very much. I would stay in the kitchen with them. There I got my carrots that I love and apple slices. Mom would call me to come upstairs, but I pretended not to hear her. Uncle Hilmar played with me, especially ball in the garden. And to reward him, Iï¿½d sit on his lap and gave him many puppy kisses. I also went on long walks with him. He would always let me taste a piece of sausage like Bratwurst and ham. 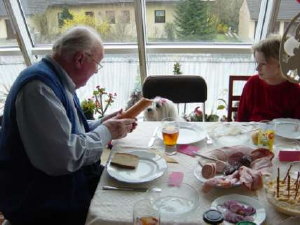 My mom is usually very strict and only feeds me my dog food. In the living room I took over the whole sofa and found my favorite soft pillow very quickly. At the dining room table, there were place cards; for me there was one on the floor with my name on it. But I was not allowed to sit at the table except for this picture. With my mom, I went every-where: on the bus, the train, the stores, the pharmacy, the restaurants, the parks, etc. Only once were we ejected from a bakery. Mom and I were quite a sensation when she was carrying me in my Sherpa bag. She showed me her beautiful city. Of course, I met many cute dogs also. I had to establish my new turf and show them all that I am the boss. I didnï¿½t like the mailman there either. I even barked at him from the bus. Maybe it was because he was riding a bicycle. All the old ladies that were sitting across from us on the bus thought I was the cutest. 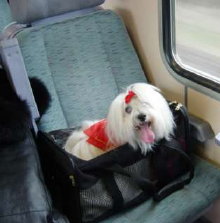 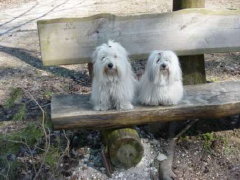 One weekend I visited my coton friends Biene and Aurelia. Biene is 5 years old and she is expecting puppies any day now. At first she and I were fighting. This was unusual for her since normally she is so docile. Aurelia, her 3-year-old daughter, is the instigator. But we soon got along very well. We went on long walks thru the forest and the fields; we chased some rabbits and ducks. Ohï¿½ and all those wonderful places to sniff. Basti, Aureliaï¿½s brother, lives in another town, but he came also to visit us. So all 4 of us were together again. I think he sort of likes me.

We went to the animal store and shopping at a mall: another sensation when people saw us 4 white dogs. I got a new harness and seatbelt for the car. Can you imagine I got sooooo dirty? My legs are quite short and my tummy was black from dragging on the ground. I just had a bath a week ago at home: this wasnï¿½t fair and I protested. No avail: I had to have a bath in a strange bathtub. Uff. Pretty soon we had to say good-bye. All of us were crying. We spent another few days in Bamberg. Then one day, we drove to the airport again and flew home. I was again a very good girl and slept a lot in my Sherpa bag. Mom was telling me that weï¿½d soon be home again with Papa. I was quiet in the taxi, but when we got out at home, I talked to the taxi driver. HE was on my turf. Then I ran to my papa who was so happy to see us again. I do wish that I can travel to Germany again soon and see my Coton friends. Auf Wiedersehen!!!

I was a little concerned how Mon Cherie would behave on the airplane for such a long flight. I needed not to have worried. It helped that I had trained her to stay in her Sherpa bag. For her it was a refuge in foreign surroundings. On take off and landing, the vibrations startled her. She had nothing to eat except breakfast on the day of the flight. She licked on ice cubes. Her nose got quite warm since the air at 35000 feet was so dry. I finally let her drink some cool water. Other than that, she was fine. On the trip to Germany, she did not go potty for 12 hours and on the trip back home, it was a record of 14 hours. Even though she was paper trained, she refused to go. And there were no ill after effects. Yes, we both had jet lag. When we were home again, Mon Cherie would wake me up at 1 or 2 in the morning. She needed to go outside and then wanted her breakfast right away. This lasted about a week. She also developed a very stubborn streak. Now she does not want to walk and sits and wonï¿½t budge; she prefers to be carried. This must be a carry over from Germany where I carried her a lot. I did have to pay $129 each way for her; she was considered excess baggage. As far as her international health certificate was concerned, nobody asked to see it nor checked it. In the US airport, she was not allowed out of her bag, but in the German airports she could walk freely.

If you are interested in reading more about Mon Cherie and her travels please visit Heidi Petran's web blog.