About a year ago Kaili, my companion Coton, and I started training in K9 nose or "scent work". Nose work is a fast growing sport which was started by Ron Gaunt, a retired police officer who has trained many detection, apprehension and search & rescue dogs. 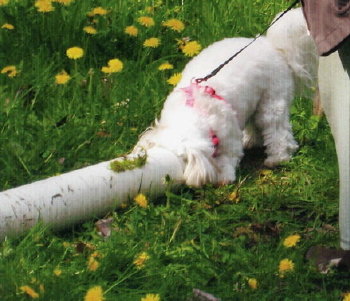 When we first started, treats or a favorite toy were placed in a box for the dogs to find. When the dog found the correct box it was given more treats in the box. Gradually a scent was added to the treat in the box. The first scent we introduced was sweet birch. A Q-tip was dipped in the scent and was placed in a metal container with a small hole in the container. After a dog became proficient the treat was removed so it needed to locate the box with just the odor and was then rewarded with treats in the box. The next step was placing the metal scent box in different locations, first indoors, then out doors and finally on vehicles. The dogs were not allowed to watch each other search. They were taught a command such as "find it" and they wear a specially designated harness or collar which gives them the clue, or signal, that they are ready to work. The dogs are taught to give a signal to the handler when they find the hidden scent or "hide". Kaili signals by either hitting the object with one of her paws or she puts her nose on it. 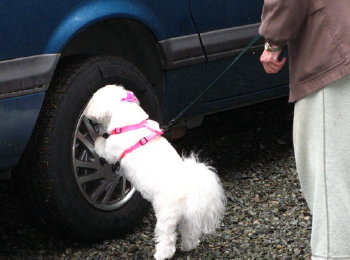 After training from September through July, Kaili & I were ready to take our first Odor Recognition Test (ORT) which was the first given in the state of Washington. The ORT is required before entering a competition trial. For the test, identical boxes are lined up in two rows with one of them containing the scent. The handler does not know where it is and must let the dog show them where it has been hidden. The dog is given three minutes to locate the right box. Kaili nailed it in fifteen seconds. Was I ever proud!

After the ORT we introduced the second scent, anise and repeated teaching the dogs to find the new odor. Last week Kaili passed her ORT on anise and we will start on the third and final odor, clove. 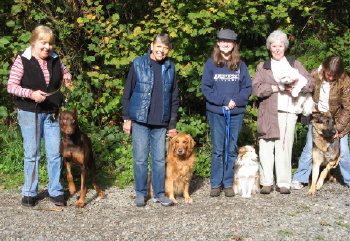 Kaili and her five buddies in our class love to hunt. We have all found our dogs to be more confident and doing better in other classes as a result of their new skills in nose work. Each dog has it's own method of finding the scent. Miriam Rose, our scent work instructor, has called Kaili a little Rotweiller in a white suit due to her hunting approach as she does her scent work. Some dogs are very deliberate and others are very methodical in their search.

For more information on Scent Work and trying this fun activity with your Coton, please visit the National Association of Canine Scent Work. If you live in the Northwest check out Kaili's scent training group Northwest Nose Works.

Nose work is a fast growing sport and as you can see from the photo of Kaili and her friends, scent working dogs come in all shapes and sizes- even Coton sized.